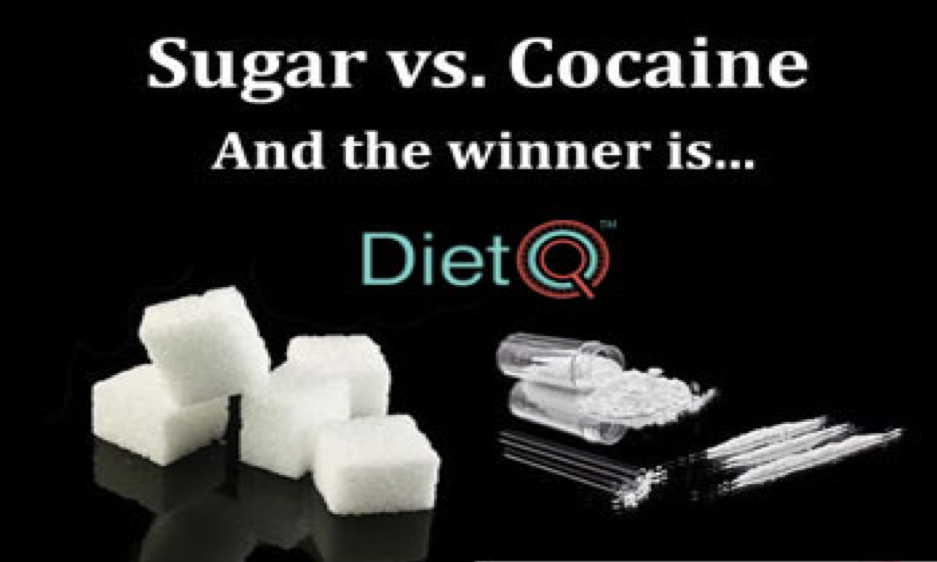 Proven to be more addictive than cocaine, a closer look at sugar may help to explain America’s rise in obesity, diabetes and food addictions.

A 2007 study (Lenoir, Serre, Cantin, Ahmed), found that intense sweetness surpasses cocaine reward even in addicted and drug-sensitized subjects leading to increased aggression upon withdrawal and a disruption of the dopamine/acetylcholine reward balance in the brain.

The alterations on brain functioning brought on by highly palatable foods produce many of these hallmarks of addiction – including intense craving, the inability to control or stop use, a pre-occupation with the substance, and withdrawal symptoms – the idea of dessert becomes elevated to a whole new level.

Research is supporting evidence that food addictions has behavioral and neurological qualities that resemble substance abuse and dependence. Increased craving for food or food-related substances leads to a heightened state of pleasure, energy, or excitement (Zhang, et al., 2011)

I think it is ironic that when the government ordered cocaine removed from all Coca-Cola beverages no one would have guessed that an even more consequential substance would take its place. High Fructose Corn Syrup hit the markets in the 1970s as a wonder product. Cheaper than sugar cane with an intense sweetness we associate with confectionery delights, High Fructose Corn Syrup is used to sweeten candies, juices, cookies, cakes, and has even found its way into less palatable tempting items including bread, soups, snacks and other pre-packaged foods.

Intense sweetness triggers the same receptor pathways of other ingested addictive chemicals, including cocaine and opiates. It alters the transmission of certain brain chemicals including endorphins, dopamine and serotonin, which, in turn, trigger the pleasure center of our brains, leaving us wanting more.

Millions of people are addicted to sugar and do not even realize it. The “food” manufactures are only concerned about their bottom line. They know that sugar is toxic and addictive; they add it to make us want their products, to feel that we must have more. We are getting sicker because our addiction to sugar, as well as our eating habits in general, have weaken our immune system. Our health care system cannot keep up with the high costs associated with obesity, diabetes, and associated diseases.

It’s so hard today to promote the fact that sugar is an addictive substance, leaving one craving more and more. Unfortunately, there are still many nutritionists, dietitians, and professionals who don’t believe sugar can be addictive to SOME people. For this group of people eating sugar is just like alcohol. Some people have no problem having a few drinks, but others cannot stop after that first drink.

We are in the midst of an obesity crisis in this country and I’m convinced sugar addiction is a major culprit. A new study of research led by Dr.Youfa Wang from Ball State University, revealed data that the obesity rate was climbing in American adolescents to a striking 21% in 2016 and more than 7% of boys were severely obese.

In my 20+ years of working with people who have eating disorders, disordered eating, and emotional overeaters, a subset of this group cannot recover unless the intake of sugar is examined. Now with new scientific evidence maybe we can educate the general public that for some, eating excessive amounts of sugar can be the gateway drug to a life of obesity, diabetes, and/or addiction. Nothing less than the health of our nation is at stake.